This is a wizard class for the GLOG that uses the wizardly magic rules HERE and was strongly inspired by Coins and Scrolls' Elementalist HERE. I wanted to adhere to the emphasis in Hot Springs Island on Elementals and I'll describe how I see this Elementalist Wizard fitting into my world. I pretty strongly use the concept of Elemental Cores that's laid out in the Hot Springs Island books as well.

The dominant magic of the Civilized Lands is Elementalism. This is due to the fact that cosmologically, the planes of the Elements are the easiest to access outside of the Material Plane. There are of course, non-planar forms of magic, but for a great many years the spells of the Civilized Lands have been bred or designed or trained to manipulate the power of elemental cores. Each elemental being has an elemental core that allows it to persist and survive outside the elemental planes. By taking possession of these cores and utilizing the proper spells it is possible to control the elements of the Material plane.

There are many more Elemental planes than many uneducated folks are aware. The elemental planes encircle the Material plane. There are of course the four Prime Elemental Planes, Air, Earth, Fire and Water, but also Planes that stretch between these and Planes that stretch up towards the planes of The Light and down towards the planes of The Darkness. Certain heretical scholars have pointed out that Up and Down are meaningless concepts when it comes to the organization of The Planes and that the ascription of directions is an artifice of the Church of the Light. In addition to the Prime Elemental Planes planar travelers and scholars have cataloged planes of Ooze, Mist, Steam, Ash, Dust, Crystal, Ice, Lightning, Acid, Magma and Salt.

Elementalists in the Civilized Lands must be registered and Sanctioned, otherwise they will be hunted by the Inquisition of the Light for performing Heterodox magics. In the Swordfish Islands, this is not much of a concern.

I'd expand the spell list to include more elements but I already bit off a lot. Anyway, here's the class.

Drawback: You must be holding an elemental core to cast spells. Each core comes from an elemental. They know you. It can be attached to a staff.
Cantrips:

Doom of the Elementalist:
As an Elementalist your doom track advances for each element separately.
You could avoid this doom by preemptively becoming an Elemental or visiting the mythical Anti-Elemental plane and becoming immune and intangible to all Elements. That has problems of its own, of course. Also, maybe obviously, switch elements until you run out, if you can keep getting your hands on Elemental Cores.

Control [Element]
R: 50’ T:[sum] * 5 cubic feet of an element D:Concentration
You can control a cubic volume of the specific element within fifty feet equal to [sum] * 5 cubic feet. For purposes of necessary checks to move the element carefully or especially forecefully, use the [sum] as the relevant stat.

[Element] Breath
R: [dice] * 20’ cone T: Area D: Instant
Breath out a fine mist of [Element] covering a large area. This does 1d4 damage and has side effects based on the element. Fire creates a great deal of light and might set things on fire. Earth gets grit or sand in the eyes. Air or water might extinguish fires. In all cases it might push dangerous gases or fumes away (or ignite them in the case of Fire).

[Element] Skin
R: Touch T: [dice] Characters D: [sum] minutes.
Transform a characters skin into [Element]. This grants damage reduction, with a penalty and bonus based on the [Element].

Bindings of [Element]
R: 100’ T: [dice]*10’ diameter burst D: 2*[dice] Rounds
All creatures in the area take damage based on [Element] and are immobilized. A successful Dexterity save reduces damage by half and prevents being immobilized. A character can break free by succeeding at an opposed Strength check.

Protection from [Element]
R: 20’ T:[dice] * characters D: ½ [sum] hours
Reduce all damage from the chosen element by 4 for the next sum in ½ hours. It also prevents discomfort from normal environmental effects like extreme heat or cold.

Speak to [Element]
R: 15’ T: Any body of [Element] D: [Dice] minutes.
Any instance of [Element] will speak to you and answer questions to the best of its ability. You have [dice] minutes to ask it questions in and out of character.

Summon [Element] Imp
R: 10’ T: Any [Element] Imp D: [Sum] Minutes
You summon an Imp of the appropriate [Element]. It obeys [dice] commands from you, after which it acts of its own accord.

1- Soldier: You were a warmage, employed by the wealthiest armies. Name a battle that saw a magical catastrophe and tell how you survived. You start with a sword and a medal for distinguished service. 2- History: You were a scholar and a mage, studying the ancient workings of magic that can still be found throughout the world. Name an ancient civilization you studied and tell where one of their ruins is in the Swordfish Islands. You start with a history textbook and a map. 3- Artist: You were inclined to use your magic for art, not just crass purposes. Name a form of magical art the rich pay highly for and tell the piece that you sold last. You start with a paper, ink and pen as well as an extra 1d6 * 10 silver pieces. 4- Smith: You were a craftsman of magical arms and armor, trained to make fantastical pieces. Name the most famous magic artifact in the world and tell how it was lost. You start with a hammer and tongs. 5- Religion: You were a mage who was devoted to the teachings of The Church of The Light. Name your favored magely saint and tell where they were martyred. You start with a copy of the holy text and an amulet with the face of your favored saint. 6- Criminal: You were a mage in the employ of organized crime. Name the most fantastic heist you were involved in and tell how you lost most of you share. You start with a disguise kit and 1d6 silver pieces. 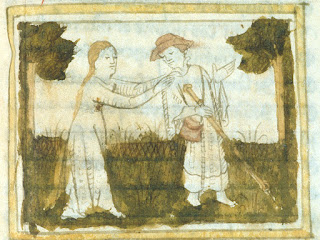